Originally posted on July 10, 2012 on CampStarlight.com

It could have been a scene from Big Bang Theory or Impractical Jokers: Camp Starlight campers and staff dancing to…silence.  But it was actually one of the newest up and coming party trends called silent disco powered by Silent Storm Sound System.  Yes, you heard us correctly.  Silent disco.  No, it’s not a sacred ritual in memoriam to what some might call John Travolta’s best years.  It’s a way to make sure that no one thinks the playlist is bad.  Everyone was given a headset that allowed them to choose their own tunes and dance the night away without decibel levels to cause vibrations which measure on the Richter scale throughout Starlight, Pennsylvania.

We won’t lie.  Silent disco is not only tremendous fun but it’s a bit comical, too.  Watching a roomful of people each dancing without hearing the sounds behind the moves made for a night of hilarity and awesome times!  It was a huge hit with everyone.  In fact, it was still the subject of conversation at breakfast the next morning for many of our campers and staff.  The general consensus is that everyone can’t wait to try it again!  We definitely raised the roof…but this time we didn’t have to crank up a few amplifiers as high as they could go. 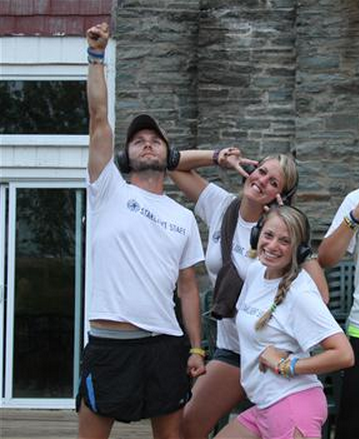